History and Life Lessons from Bishnupur in West Bengal

Dotted in brick reds, adjacently lined through the narrow streets, amidst green parks and dried creepers stood not one but an array of temples; some decked with lights while some dressed in ruins. Hidden far far away from the popularity of all the temple towns in Southern and Northern India, this not-so-big not-so-widely-known temple town of Bishnupur in the Bankura district of West Bengal is a very unique pilgrim pocket in its own way! The popularity of this town is well, only cornered in the heart of Bengali tourists; the trails of which can only be traced from the Bengali media coverage.

Despite, Bishnupur holding a tenure with one of the important dynasties of India, The Malla Dynasty, there has been no reference of its historic elements in the school history textbooks across India other than in West Bengal, thus, carelessly rubbing off the history of this tiny temple town. With such demystifying fame of its own, Bishnupur; somewhere conveniently puts up in bridging the gap between being popularly touristic among the Bengali population to being narrowly offbeat for the rest of the Indian population.

When was Bishnupur born?

There is an interesting legend to the origin of the Malla dynasty in Bishnupur.

Once upon a time, somewhere back in the 7th century a pregnant wife of a Rajput king was passing through the forests of Bengal and went into unforeseen labor pain. Out of all absurdity, the Rajput king deserted her in the middle of the forest and continued on his journey. That is when the pregnant wife gave birth to a son in the nearby village of Bagdi who grew up to be a popular leader. Eventually, he founded the Malla dynasty in Bishnupur under the name of Adi Malla. Since then the history of Bishnupur can be traced back to 694 AD.

What is the uniqueness of Bishnupur?

The terracotta temples of Bishnupur are the ones that are specifically unique to their existence. In an age that offered no availability of tiles, terracotta was the only substitute to build these temples. The medieval style temples wrapped in the tones of brick red and dusty brown are only to be found in Bishnupur and not anywhere else in India.

A leisure walk down the temple premises and a keen sense of observation at the ancient pillars could drop you amidst a plethora of narratives and scenes depicted from the age-old epics of The Ramayana and The Mahabharata. A lot of the other narratives that can be found in the temples are based on the sect of Vaishnavism which was introduced to the people of Bishnupur by the Malla king, Bir Hambir, who is considered to be one of the most powerful rulers of the Malla dynasty till date.

The terracotta temples weaved with the tales of the Indian mythology form the heart and soul of Bishnupur and can be spotted even in some of the most deterred nooks of the town. However, if I had to choose some, I’d like to list a total of 4 temples, that stand out to be my personal favorites.

Sitting wide and broad amidst the vivid green open spaces and freshly flowered lawns, the Rasmancha tags out to be the temple of prime importance; mythologically as well as for purposes of tourism.
Built back in 1600 this quaint pyramidal structure is located at the heart of the city. It is designed in a typical way where it presents itself as a very mysterious piece of heritage. On the inside, The Rasmancha, holds a continuous flow of arcs forming a maze-like structure that connects to the center of the temple through a series of pitch-dark echoing alleys.

Historically, during the reign of the Malla Dynasty, The Rasmancha grew popular as it primarily conducted the Ras festival; which is why it came up to be named as ‘Rasmancha.’ The uniqueness of the Ras festival lies in its correlation with the auspicious number 108. In the Ras festival, 108 photographs of Lord Krishna were collected from the local households of Bishnupur, and 108 Brahmins were invited to conduct the puja with 108 lamps. Doesn’t that sound strikingly mesmerizing?

Of all the tall standing terracotta structures of Bishnupur, the Jorbangla temple stands out to be my second favorite. Jorbangla typically resembles two huts thatched together with the support of a single tower and is a ‘Panch Ratna’ temple which means ‘made up of five spires.’ It is beautifully ornamented with tiles depicting the culture, lifestyle, and the daily ongoings of the many diety of Hinduism in a very dramatic manner. The Jorbangla temple also shares ancient intriguing stories of the army, their lifestyle, the sports, the leisure activities and the clothing of the aristocratic ladies to the attire of the common village womenfolk through the skin of terracotta.

The Radhamadhab temple stands somewhere in the middle of being partially dilapidated to be partially taken care of. It is an Ek-Ratna temple which literally translates to, ‘a single spire temple.’ It was built back in 1737 AD and is one of the many temples that have very popular images of the Ramayana and the Krishna Leela. However, what had certainly struck me the most about this temple is its chipped terracotta walls layered with a dusty brown tone that makes the iconic Radha Madhab Temple be an interesting muse for a photographer.

Almost every temple here has depictions from the Ramayana, Mahabharata and the Puranas. But my favorite happens to be the one I’d stumbled upon at the Shyam Rai Temple which was built in the 17th century. This temple stands out to be one of the most prioritized monuments of the Archaeological Survey of India. It is also one of the ‘Panch Ratna temples’, literally meaning, ‘the five spire temple.’ What mostly grabs the attention of the tourists at the Shyam Rai Temple is ‘The Rasachakra,’ which is an embossment in a medallion shape and it shows Krishna dancing with Radha and the many gopinis in a circular formation.

The Shyamrai temple depicts snippets of life in Bishnupur through its terracotta tiles. You could easily spot a display of the clothing of the Vaishnavas wearing just a thin and a delicate tulsi mala (a garland made of tulsi beads) around their necks, another famous embossment is the one that shows no person from the lower caste is seen wearing any ornament of any sort. Other than that, images of chariots and palanquins feature quite frequently throughout the brick red walls of this temple depicting the different modes of transportation of that era. The Shyam Rai temple also heavily portrays sculptures including royal hunting sights, musicians and dancers.

What is Bishnupur famous for?

Rewinding back to the days when the Malla rulers ruled in great pomp and splendor, this very town of Bishnupur bloomed in the verses of Hindustani classical music coupled with the folk music coming from the many tribes of the Bankura district. In about more than a hundred Bishnupuri tiles, there have been features of choirs of singers and musicians with a variety of musical instruments. Apart from the flair of classical music, Bishnupur is also well known for its exquisite terracotta jewelry, and the terracotta animal sculptors like the horse, and the elephants which are exclusive to this town.

However, with the ongoings of modern times, the local artisans of Bishnupur have extended their expertise in molding the terracotta clay to form tribal faces and figurines. Apart from pottery, quite quintessentially another feature that Bishnupur marks as an epitome of its identity, is its ‘Baluchari Sari’ which is made up of a special kind of silk called Tussar silk. These saris have episodes of Ramayana and Mahabharata woven into the border and the pallu. Another feature of Bishnupur that is exclusive to only this place across the country is the ‘Dashavtaar Taash’, where Taash translates to ‘playing cards’ (in Bengali). The Dashavtar Taash dates back to the reign of the Malla rulers and is considered to be one of their favorite indoor games. These playing cards feature the ten different avatars of Hindu God Vishnu drawn by hand!

What did Bishnupur teach me?

1. The Power of Time

Walking down the streets of this quaint town that was born a long, long time ago, I was awestruck at the millennial architecture that stood right before me. The feel of the red laterite soil, as called ‘morham’ (in Bengali) underneath my feet and the town that unfolded layers of storytelling in every inch of its corners, flashed me with the theory of the test of time.
In a bygone era of the Malla dynasty, the same streets and the historic nooks spoke of power, strength, and victory but now that I stand on the mud paved roads, amidst ruins peeking from every corner, all I wonder is, how a town ruled by one of the powerful dynasties is now identified as an ‘offbeat’ place, whose history is lost under the many blankets of time. I wonder such is the power of time!

All this while, I’d only come across cliched quotes about time, however, it didn’t occur to me before Bishnupur unfolded, as to how powerful is the context of time. But, today in this land of the many historic temples; some ruined while some still standing the test of time, all I would love to take away would be the narrow insight of time!

2. Ruin is a gift, ruin is a road to transformation, and obviously, change is the only constant.

Inevitably, with the motion of time, something that stands strong today would be ruined with a passage of many years and many months down the line. But by the walls of the Madan Mohan Temple that is partly ruined, all I could think of was some food for thought I’d recalled then, from the popular Hollywood movie, ‘Eat, Pray, Love’ ~ which said, ‘Ruin is a gift, ruin is a road to transformation.’

Well indeed never before had I focused upon it so closely, until my visit to Bishnupur. Surely, it is a gift that will lead to transformation keeping its roots alive but also grooming with the demanding pace of time. Just as facts state, the terracotta temples of Bishnupur would soon be listed as one of the UNESCO World Heritage Sites thus, paving its way to better conservation of both history and heritage. Certainly, something I learned the very day I visited Bishnupur, is the untimely fact, that the only essence that paves way for newness is change.

What to know before you go?

Where to Stay? Bishnupur offers a good variety of medium-range guesthouses located right in the heart of the main town.

How to Reach? Bishnupur is very well connected by bus routes with most of the major cities of West Bengal like Kolkata, Durgapur, and Asansol.

Nearest Domestic Airport – Andal which has come up recently in Durgapur, West Bengal. 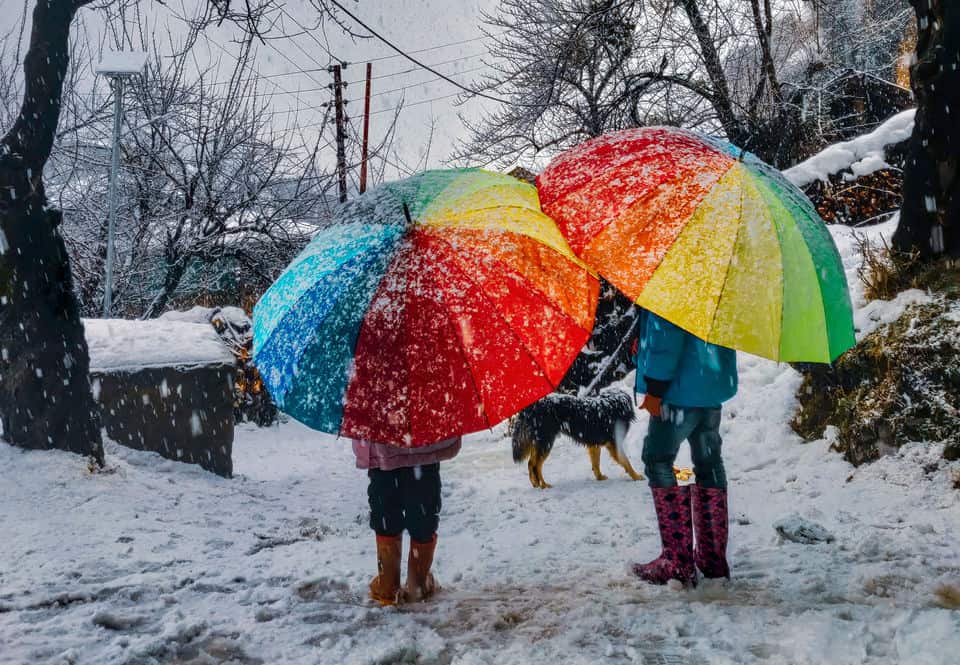 Experiencing Snow for the First Time? You MUST Know These! ❄️

The beginning of this article takes me back to the first time when I met Snow. It was unbelievably white...