Experiencing Snow for the First Time? You MUST Know These! ❄️

The beginning of this article takes me back to the first time when I met Snow. It was unbelievably white and fluffy. Something about it made me feel like a kid, even though I was good 23 years old. It had a dreamlike like quality. Everything under the big blue sky had been lulled to sleep under the white blanket of snow. At first, when I saw fresh snow, I started running towards it like a mad dog. The visuals of this memory run like a montage in my head even today. I was knee down in snow, hands full of snowballs, and for some strange reason, tears rolled down my eyes. For a moment I simply stood there, jaw dropped, wide-eyed, contemplating the real world Narnia. Breaking the reverie of thought, the moment I tried getting up, I slipped.

This is where the drama begins at 9350 feet. I came rolling down to the mighty edge of the mountain and held on a little branch. My flat shoes almost got me killed; my travel mates almost saved my life. It’s amazing how one moment you could be ecstatic in the mountains and simply die in the next moment. The lesson out of this? Don’t be a fool to underestimate the mountains. So here’s what you can possibly do to make sure that you brave your first snow adventure and possibly come out ecstatic and alive:

Let’s put it as simply as possible. You can’t be wearing your bathroom slippers on a trek. I know someone, who did this and is still alive. But clearly, this wasn’t the best choice. As mighty the mountains are, they can be unforgiving and harsh sometimes. To deal with any form of hardship or adversity that you can possibly think of, you mustn’t ignore the importance of good gear. Last year, I was organizing a trip to the Hampta Valley in December. It happened so that most of the people who signed up for this trek were first-time trekkers. They’d never been up north, to the Himalayas, ever before. As a result, when I met them in Manali for the first time, they were shivering in their thin cotton t-shirts, as the whole Manali rushed past them in thick woolen sweaters and jackets. Some of them even trekked in their denim pants and had a hard time when the denim drenched in snow wouldn’t let them hike in peace.

Obstacles in the mountains aren’t controllable, but a better gear can certainly be your only saving grace. This reminds me of how when I saw snow for the first time in Triund (Himachal Pradesh), we weren’t prepared for the adventure. Triund was a spontaneous decision. We were in Dharamshala and had nothing to do. So we thought of hiking up to Triund top. Do you know, one of those winter shoes, every mother has? The flat Bata ones? Yeah, that’s what I was wearing. We trekked up with flat boots and thin clothes. Though, it turned out to be adventurous; one can’t deny the thin line between being adventurous and foolish. As a lesson before heading out for another “adventure,” I went shopping for trekking shoes and warm clothes. But that’s just the basic— from headlamps to swiss knives, gear can be anything and everything that aids survival when you meet wilderness.

So here’s the deal kid, gearing up for the adventure is not just a phrase. You’ve really got to gear up in all possible ways.

Both physically and mentally. A snow adventure does sound fun, but one needs to prepare for the winter. Proper mountain gear is just one part of this preparation. Beyond that, one also needs to consider several other factors like:

Altitude sickness: This is no joke. One can only prevent it with a course of Diamox or other medications. But once it hits you, you better have lots of water and return to a lower altitude as soon as possible.

Overall fitness and immunity level: Sedentary lifestyle keeps us a little out of touch with our overall fitness. Take, for instance, my mother. By the city standards, she seems to be doing just fine. However, the moment she came last time to see me in the Manali winters, she got sick.

Bare the cold as much as you possibly can: A friend was preparing for his first snow adventure for a high altitude trek. He jogged every day after sundown in Delhi winters in a t-shirt. This helped in two ways. One, jogging in the evening around trees prepared him for the high altitude adventure as there is less oxygen in both the scenarios. Two, being out of the comfortable warmth and baring cold enhanced his stamina for a greater winter.

Get a small medical kit: Pharmacies may or may not be easily accessible depending on where you plan to go. It’s always a good idea to carry a small medical box with basic medicines for fever and pain.

Most importantly, speaking sheerly out of the experience, the more you stay wrapped in three layers of blankets—contemplating how cold it would be if you head out of bed, it will just ruin the day. A far better idea is to get up, put on some layers of warm clothes, and head out to smash some snowballs.

If you plan to spend a long winter somewhere in the mountains, the first thing you’d need is wood. There is no surviving a long winter without wood. Of course, short vacations can be handled well with electric heaters. Though electricity may not be a long time friend. Since times immemorial, folks in Kashmir roam around all the time with Kangris. They are basically earthen pots with hot embers designed to stay warm. Beyond proper clothes, wood and embers go a long way in surviving the long winters.

Once, during a long Manali winter, I did a terrible mistake of washing my hair and heading out in the evening. At freezing temperature, you simply don’t invite a running nose on such blunders, but it is a direct invitation to pneumonia.

Little carelessness can suddenly escalate to pneumonia; thus one needs to mind minute decisions of when to take a bath or go out for that matter.

This is not a picnic in your neighborhood garden. What makes the deal even more critical is snow. The weather can change dramatically at any moment, and snow can erase the trail way more quickly than you can possibly imagine. I remember the story of two trekkers with a group of city folks on the Hampta trail. This happened a couple of years back. They were accompanied by a local guide, who advised them not to consume alcohol on the trail, but no avail. As a result, these two trekkers lagged behind and eventually were separated from the group. A sudden snowfall erased the trail and the drunk trekkers got lost and finally died. It is important to follow the instructions of the guide and respect the mountains. This is not your usual clubbing place.

My landlords here in Manali have a room full of agricultural stock— wheat, pulses, rice, dry fruits, and other food items. When I asked them what is the requirement for stocking up so much, they simply said that we don’t know how long could the winter be. No matter how long or short your adventures with snow would be, one needs to carry a basic stock of necessities.

This could probably even save your life. My mentor, Indranil, once got terribly stuck in an avalanche on a trek. This episode dates back to his alpine trekking expeditions. He was all alone near the Kanchendzonga basecamp, and help was a bleak hope. If it were not for two packs of Maggi, and some snacks he couldn’t have survived the longest nights of his life. Same goes for people who get stuck in landslides and other unforeseen calamities in the mountains. Little savings, can certainly save your life!

Listen to your Instinct

Once during a snow adventure, I slid down the mountain and popped up in a place where I couldn’t see any of my travel mates. I decided to wait for a while, but nobody showed up. Finally, I started walking on something that looked like the trail. My instinct kept telling me to hold on for a while and wait longer. A few steps further, I finally decided to wait. After half an hour my fellow travelers showed up. It turned out that while sliding, one of the trekkers had slightly twisted her ankle and she needed a little help, without which she couldn’t have descended on her own. With joy, we reunited and helped her get down. I finally figured out that what I chose as the trail wasn’t really the way down the mountain.

What I mean is, one—if I would have carried on what seemed like the trail, I would have eventually got lost. Two— my friend would have had great difficulty in descending alone. So listen to that little voice in your head, especially in the mountains. It knows what to do. 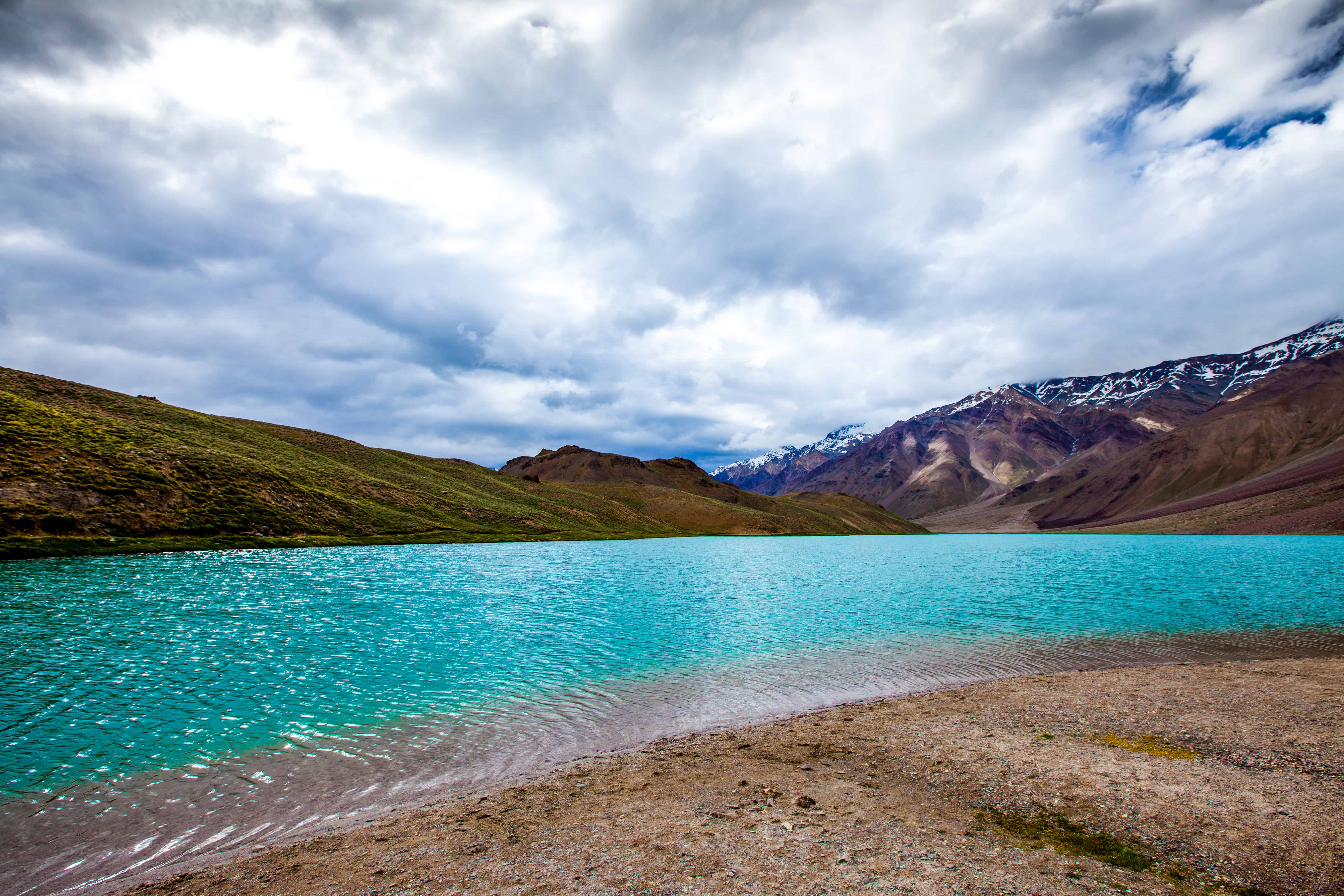 Chandratal Lake – A Place to Get Away from Life itself!

It was just another work day, and I was in the middle of filing away some documents for a client....