This story begins at 15000 feet. It is about a haunted trail, a forest that calls, a mountain that shakes your soul, a lost paradise, and most importantly a trail called Dzongri-Goechala, the kanchedzonga basecamp trek. It is said to be the trail of the lost paradise of Shangri-La. It is the “mythical” land of happiness- an “imaginary” heaven on earth where people are immortal and blissful. Many refer to Goechala as the last Shangri-La. Kanchendzonga, literally translates to the five repositories of God’s treasures. It is sacredly believed that the mountains around Yuksom also hide the secret gateway to Shangri-La, which will only be revealed to the right person, at the right time.

The Story of Shangri-La

Once upon a time, a revered monk adjusted his glasses looking distantly at the mountains while he recalled the story of Shangri-La. He began narrating the legend to me, as a magical recollection from the forgotten past. As per the legend there was a monk, one of the direct disciples of Buddha, the only one who knew the map to the land of utopia. Being the sole bearer of this information, he was haunted and chased by many who wanted to enter and plunder the valley of Shangri-La. The monk somehow escaped to the valley and jumped off the cliff. Ever since then, we have lost the way to the valley of bliss.

I could barely believe the monk until I explored the trail. Magic became real when I first saw Kanchendzonga. It was as if everything that I have done or undone in this little life was to get there. I asked the rest of the folks to go ahead without me, while I sat jaw dropped looking at majestic Kanchendzonga. Have you ever experienced one of those moments, when you feel small? Small, like you, are just another blink in the face of the Earth? Like many emperors, winners, losers, sinners and sages have walked in this world and passed away. A feeling that we all are nothing but just stories. Kanchendzonga made me feel like life is a short story. Like everybody else, we too will be wiped off, but the mountains remain. Hours rushed by and I lost the sense of time. I woke up rattled from the daydream to realize that the winds are colder and the sky crimson. Evening paved its way with a sense of emergency. I had to rush to catch up with the rest of the group and hike up the basecamp for the night, that is, Dzongri. The forest that I was about to enter alone is notorious. It’s a Rhodendrone forest, with thick moss covering each branch. I entered the forest, with the setting sun casting a spotlight on every branch, making the whole forest look illuminated.

Have you ever experienced one of those moments, when you feel small? Small, like you, are just another blink in the face of the Earth? Click To Tweet

Thought of the Lost.

Many travelers have “lost their way” on the Dzongri Goechala trail. As I started walking towards Dzongri, my mind wondered about the many lost souls in the lost paradise. Once, there was a college student from Calcutta, he fell behind the group and returned back to the previous basecamp, Tshoka. It is also kind of a little trekkers village with trekking huts and stays sprinkled all around it. It is not a place that exists in isolation. It is the only basecamp on this trek, where one can find the network on top of a rock. He called the local agency that had organized this trek, requesting them to send somebody to take him back to Yuksom. By the time a local guide reached Tshoka, the man was nowhere to be found. It’s strange for somebody to get lost “somewhere” from a place like Tshoka, that too after establishing contact.

Another story resonates a similar tale. An experienced local guide in the forest of Phedang was hiking solo in the entangled wilderness. The guide left the trail and ventured into the jungle to capture the picture of a bird called blood pheasant. What initiated as a little detour in the forest, soon turned into getting lost. This was followed by a local search and rescue mission to find the man. When they found him and asked about what happened, he said, “the jungle called me.”

Many souls have ventured and were called by the jungle, with fewer to be found again.

Thinking about these missing souls, I somehow reached the edge of the cliff where the rest of the group was sitting next to the Prek Chu river. Sitting by the corner, watching the revolting river flow by, I thought if all these “lost souls” were present at the right time and the right place and they stumbled upon the gateway to the magical world? What if Shangri-La was revealed to them and they decided never to come back? The thought in itself opened the portal to my inner Shangri-La.

When I saw Kanchendzonga for the first time, I knew it; it was my Shangri-La. I feel we all have little Shangri-La’s within us- Little kingdoms of happiness, waiting to be explored.

Day 11: Tshoka to Yuksom via Bakhim and Sachen / 6 hours.

How to Get There?

The trek starts from the quaint hamlet of Yuksom. It is loved for historical monasteries and cozy homestays. One can book a cab from Bagdogra or Siliguri to reach Yuksom.

Flight: If you can, take a flight to Bagdogra. The bird’s eye view of mountains, right before the airplane hits the ground is breathtaking.

Train: I haven’t done this, but have always been tempted to. Train journeys are magical. In case you are up for this, take a train to Siliguri. From Siliguri, one can hop on a bus to Yuksom

Bus: The nearest bus stand to Yuksom is Siliguri. Take a bus to Siliguri and then catch another one for Yuksom. Private taxis are also available. 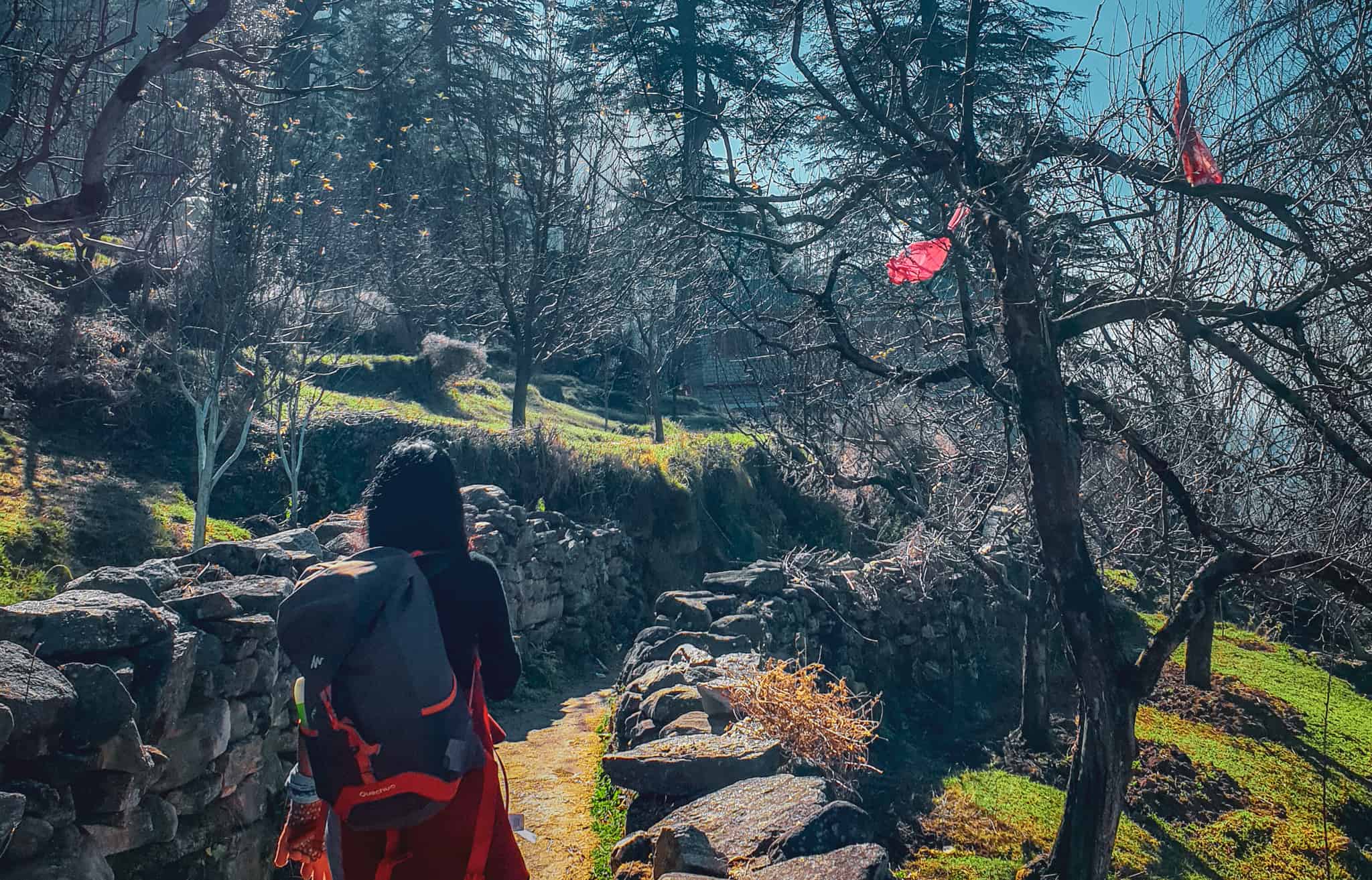 The Secret Trails of Manali: The Hidden Beauty You Missed!

Beyond the snow wrapped mountains, the colorful tales of Manali Mall Road, and the hippie vibe of Old Manali, there...