Unwind at a Lesser-Known Island away from Mumbai 🏝️

Setting up a makeshift office amidst the rectangular paddy fields with hovering grey clouds and a steady breeze fluxing by, it only endures my inner spirit with a charm so wakeless that I am dropped out of the track of what season it is.

It’s not the barren winter neither the blistery summer. With the ecstasy it beholds, it feels like an amalgamation of the erratic monsoons and the bloomy spring.

The vivid green paddies dance to the rhythm of the flowy wind in the company of a hundred birds dotting the colorful palette of this picturesque countryside. Humming to the melody of birdsongs, I’m taken aback to a mood acquainted with the nostalgia of a home that was perched in a faraway coastal strip somewhere by the shores of the Arabian sea.

Such was the notion of my nostalgia that floated my love for a home from the Eastern fringe of the country to the Western coast. I’d let that feeling spring up my spirits with my laptop and a few chirpy birds as my companions in the backdrop of a moist afternoon. With a warm cup of coffee by my side, I’d only love to get into a candid conversation about a home that was just what it was!

The Home we’ve had always longed for.

It was just the two of us. Both in each other’s company. Hands held tight; our hearts heavily panting with fatigued bodies. We murmured of all things that our shriveled throats couldn’t convey of. And we smiled about all those things that needn’t have to be conveyed.

Sitting by a ruined arc of a 15th-century fort, overlooking the line where the sea met the sky, we both conversed of all things that sat settled under the rush of a busy city that accommodated us. The silence of an isolated fort in a faraway coastal hamlet with no soul in sight haunted us less and freed us more. In the lengths of what came to be known as an Island of Korlai, we’d left back all the clingings of the city as we’d ferried ourselves to a place that was entirely not on our cards.

Stumbling upon heaps of tourists in the busy town of Alibag, we’d randomly googled of an offbeat partner somewhere not very far from the main town skirts of Alibag, fortunately enough we’d happened to risk it to be the island of Korlai that sits about 20 km away from Alibag. Instantaneously, we’d boarded an auto rickshaw and were dropped off at the foot base of the lesser-known Korlai Fort.

The Dream we’ve had always dreamt of.

With the diminishing cool winds of winter to the rising hot Sun of a not-so wintry afternoon, we’d made up our minds to hike up to the height of the fort that seemed ruined and devastated.

With bodies tanned and hearts gasping, we followed our instinct, trusted the timing of the universe and started off with a spiting hike to the Korlai fort that stood atop a rugged muddy hill. Hiking along the rocky and dusty path, we passed through stretches of clean white sand and were marked by bits of joy at on and off glimpses of shy wildflowers.

As we hiked along the path that had invited us to be its guest, the only noise that stayed through, was the crush of the dry hued amber leaves beneath our feet and the casual play of the high and low tides touching the shore time and again. After a continuous struggle of finding the hidden way through thickets and thorns, we were left euphoric at the panorama that was right before us.

With only a lighthouse standing tall, and an entire fort and a rocky shore to ourselves, it was the kind of high we’ve never had imagined. Within the fortifications of a Portuguese ruled fort that treated us to glimpses of the Korlai village with colorful dotted houses and a white stretch of sand, it was no less of a dream come true.

Little had we known that a 3-hour journey of a ferry and a bus ride combined together could bring us to a land of tranquility.

Far away from the noisy cosmos of the city, we were landed in the cluster of a million seashells in the middle of a no network zone that only held us to each other leading to conversations of a lifetime coupled with wisdom, humor, laughter and a lot of love. Sitting by a ruined arc of a 15th-century fort, overlooking the line where the sea met the sky, the gaze of the bastions down the foot base of the fort kissing the rocky seashore had a charm of its own, standing its test of time, having conversations with a mime.

The dazzle of what struck us urged us to challenge the adventurous spirit within. From where we sat, what caught our eye were the abandoned bastions, but the road to the bastions down the foot of the fort seemed to be missing.

To consider dropping the idea wasn’t even a score, yet for the second time, we trusted our gut and went on for the adventure that had soared and tossed our spirits high up in the air.

The adventure we’ve had never thought of.

By the edge of the cliff, we stood, down from where the bastions only seemed tiny with again no road to be visible.

Walking deep through the thickets, down the steep cliff we stepped down the rolling rocks that lead us to sharp cut wide steps. Hands held tight, crushing a hundred dry leaves, we hopped, rolled and took long steps down the cliff that served us with the roaring sea on both the ends. Having each other’s back, we took leaps of faith down the final steep slope and ran down the exit of the bastions only to find ourselves being welcomed by unending stretches of sand, a roaring sea, and a black rocky coral shore.

For about 10 minutes that we sat, the emotion that flew through our conversations was the one I still fail to express in words. It wasn’t just of joy, or happiness or contentment. No, it wasn’t that of adventure either. What had then consumed our bodies, our minds, and our hearts wasn’t fleeting neither that of any permanence.

But in all that I could express, it was something we’ve had craved for years. Unnamed. Untamed. It was a sentiment that fidgeted our souls to a feeling of euphoria that could only be sensed and not described. It was the adjourn of a life that we’d long lost ourselves to. It was the origin of something that will always be a yardstick of the utmost pleasure I could derive from a journey.

It was a journey that has strung a rhythm in me, unlike any other place, because it was just what it was. Butterflies in our stomach, and glitter in our eyes, hand in hand we walked stumbling, rolling and jerking off the pointy coral formations.

One moment we danced to the glisten of the evening Sun, the other we walked barefoot down a beach full of conches and seashells. One moment we sat on one of the sharp surfaces digging our feet deep inside the warm sand, the other we played with beach dogs. In the joy of being disconnected, we as companions were connected like never before. In the silence of all our conversations, the secrecy of our language was well deciphered.

By the foot base of an abandoned fort, we sat, admiring the golden Sunset, reliving the tiring moments en route the hike through the path that everyone takes but coming down the fort all ecstatic because for once we’d not let that tiny voice of our instinct suppress down the burden of logic and fear.

Only for once, we’d taken the chance of listening to our heart, and had opted for the route only a few would’ve embarked on. And for a hundred times over and over again, that component of Korlai that is has stayed back within. It would be only miserable of me to call Korlai a trip, instead, it was a journey that had unleashed us to the part of ourselves that was only foreign to us. Until next time, I’d cherish the sentiment of Hiraeth (a longing for a home that never was) that has followed me through.

To the many euphorias in Korlai, with great love and digress, I bid you adieu! Keeping aside all the places I’ve been to, Korlai has been a treasure of a hundred journeys that are bygone and many more that are yet to come.

Come the evening that I’m treated to, the grey clouds have now opened up to a pastel-colored Sunset sky with flocks of birds flying back home, in the middle of a thousand fresh paddies and the aroma of petrichor, with no home of permanence, I wonder of a home that I’ve left behind.

As Pascal Mercier once wrote: We leave something of ourselves behind when we leave a place, we stay there, even though we go away. And there are things in us that we can find again only by going back there.

How to go? Korlai is a tiny coastal fishing hamlet located at a distance of about 23 km from Alibaug (100 km away from Mumbai) and can be reached by an auto rickshaw or a two/four wheeler.

The vehicle could only go up to the entrance of the lighthouse, beyond that you will have to hike if you wish to go to the top of the fort.

Where to stay? Finding accommodation in Korlai could be difficult; however, Alibaug and Revdanda are the nearest possible options with affordable homestays, hotels, and resorts.

Safety Tip – It is advisable to avoid visiting the fort post-Sunset. 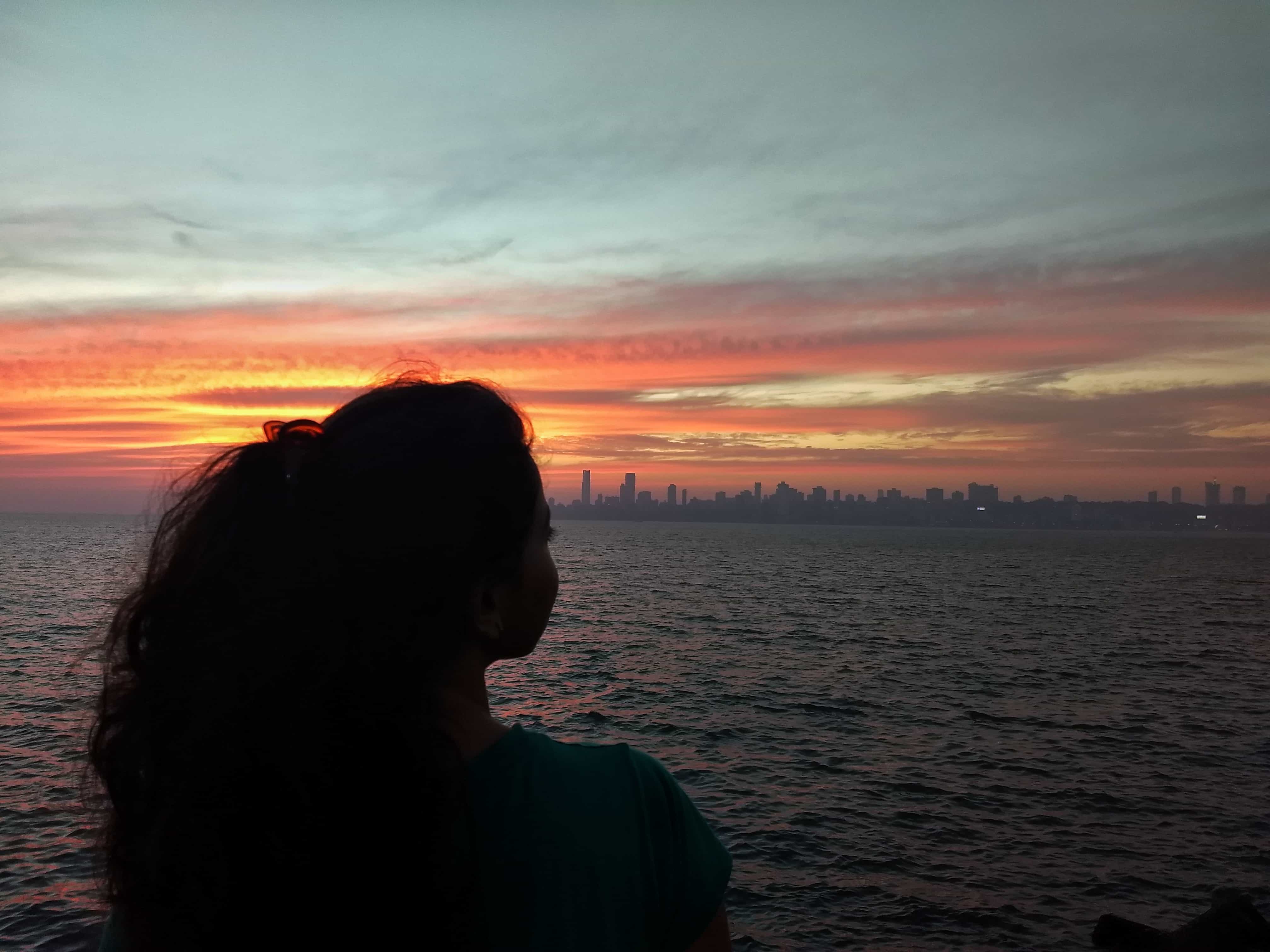 My Favourite Nooks in Bombay as an Introverted Wanderer.

From a young at heart introverted teenager to grow to be an ambivert it's been a gradual process. A lot...