Nagpur, best known as the Orange Capital of India, is the Winter Capital and the 3rd largest city of Maharashtra. Gond King Raja Bakht Buland Shah laid the foundation for the creation of the city in 1702. Of the many fascinating facts about the city, one is that it is the located at the geographical center of the country and a “Zero Milestone” was erected by the British to measure all the distances from here. The stone consists of four horses and a pillar, all made of sandstone. It is also considered as the Tiger Capital of India since out of total 39 Tiger reserves in the country, Vidarbha holds about 13 Tiger reserves.

Nagpur, best known as the Orange Capital of India, is the Winter Capital and the 3rd largest city of Maharashtra. Click To Tweet

So let this amazing city make it to your travel itinerary next time wanderlust takes over you. Following are top places to visit in the city of Oranges.

Deeksha Bhoomi, with the largest hollow stupa among all Buddhist stupas in the world, is a sacred monument and a place where Dr. BR Ambedkar converted to Buddhism along with about 380,000 followers on October 14, 1956. The design resembles the Great Stupa of Sanchi with the images of the ornamental gates and three tired umbrellas at the top, which signifies the Buddhism. It has been granted the status of State monument recently. We also have a Bodhi Tree, a sacred fig tree, besides the Vihara. This was planted at Deekshabhoomi from three branches of the Bodhi Tree at Anuradhapura in Sri Lanka, as a memorial of Buddha’s enlightenment. The place is worth a visit for its historical and architectural grandeur marked by a very peaceful and calming atmosphere inside where images of Lord Buddha and a picture gallery Dr. Baba Saheb are focussed.

Popularly known as Ajab Bangla the museum is situated at Civil Lines Nagpur, about 1.5kms west of the city. It is one of the oldest museums in Nagpur, established in 1863, with an extensive collection of archaeological pre-historic artifacts, coins, ancient inscriptions, sculptures, inscriptions, handicrafts and articles of day-to-day use from ancient times. There are nine galleries portraying the exhibits in the categories of art and craft, mammals, reptilian and avian category, stone sculpture, tribal art and culture, arms and weapons, painting, archaeological, Nagpur heritage and natural history domains. The museum remains closed on Mondays and other important holidays.

An easy and fun way to learn about fundamental and everyday science can be experienced here. It enthralls young and old alike with about fifty interactive mechanical exhibits and other sophisticated physical and electronic displays. There is regular 3D-screening of environment and science movies, taramandal/planetarium shows along with a Pre-historic Animal Park (Light & Sound Show) after sunset. A sky observation programme is held every Thursday and Saturdays where visitors can observe the planets, stars and other deep sky objects using telescope after the sunset.

It is an excellent place to learn about the history of Indian railways. Owing to gauge changes close gauge trains have a special place in history. You can find information about close gauge train and lines from the signal system, saloon car, and passenger bogey to goods wagon. There are old steam and diesel engine on display as well. The archive section of the museum got a collection of rare stamps, old documents, locomotive specifications, diagrams, and railway manuals. A diesel-hydraulic locomotive and a narrow gauge royal carriage built in 1899 by Orenstein Koppel of Germany along with toy train ride remain favorite visitor attractions.

The stunning lake is the largest lake in the city replete with natural beauty and splendor giving a mesmerizing view of the city from atop. Often touted as city’s sunset point, it is also the origin of the Nag river. Nagpur Municipal Corporation (NMC) has recently constructed a Swami Vivekananda memorial- an island-like structure made on the lines of prominent Swami Vivekanand Kendra Kanyakumari, at overflow point Ambazari Lake. A beautiful garden surrounds the statue. Railings in the garden and premises of the sculpture built by utilizing red sandstone and fine art.

As the name goes, the garden offers astonishing sights of various types of roses and floral bounty. Numerous birds of different species also frequent the place, so it is a delight for bird watchers as well. The colorfully painted iron structures in the garden bring the style of the Japanese gardens and hence the name. The gardens with their varied kinds of roses and other green plants, trees make for a soul-soothing relaxing experience in the bustle of modern life.

It is one of the oldest temples in the city and is located at a walkable distance from Nagpur railway station. The Swayambhu Ganesh temple is frequented by many devotees and visitors all the year round. They seek blessings of Bappa for the fulfillment of their wishes, which they have a belief often come true.

At this place, one can find coins and currencies from over 200 countries. On display are collector edition coins, foreign coins, British India East Company coins, ancient coins, coins of Mughal era along with a good number of original old Bollywood posters, lobby cards, medals, clocks, gramophones, etc. The gallery which is inspired by Hollywood production house, 20th Century Fox, is owned by Avinash Ramteke who is an avid numismatist. Visit the place for a unique learning experience even if you don’t love collecting coins.

The ancient fort is over 200 years old, a site of the Battle of Sitabuldi (1817) and is situated on two hillocks: Badi Tekri and Chotti Tekri. It was built by Mudhoji II Bhonsale of the Kingdom of Nagpur. This happened just before he fought against the British East India Company during the Third Anglo-Maratha War. There is a memorial inside the fort in dedication to all the soldiers who have died in the war between the Marathas and the British.

Mahatma Gandhi was imprisoned in the fort from 10 April to 15 May 1923. Also, King George V and Queen Mary of the United Kingdom gave audience to the people of Nagpur from the fort during their visit to British India. A pillar to commemorate the event stands in the fortress.

Furthermore, it was here that Nawab Kadar Ali, the grandson of Tipu Sultan was hanged along with eight aides for fighting the British. A mosque is maintained in the fort to mark the location of the hangings. The Indian Army supports the graves and mosque as a mark of respect for the gallantry of all who died.

The fort is currently home to the Indian Army’s 118th infantry battalion (Territorial Army) Grenadiers. It is opened for public only on three days of the year: 26 January, 1 May (Maharashtra Day), and 15 August.

Resembling an archetypal south Indian temple architecturally, this two-floored place of worship remains a popular pilgrim attraction. The first floor of the temple is dedicated to the worship of Lord Balaji while the second is for Lord Kartikeya. The temple’s main attractions remain Lord Balaji and Lord Muruga showering their blessings on all who visit. Also, the area surrounding the temple (seminary hills) is very serene and picturesque making the whole trip a good visit.

Rucha Wankhede An Avid Reader, a Dentist, who cannot resist a good book, or anything Jane Austen, Kafka, Dostoevsky, and Violet. In the dread of perpetual, and believe change is the only constant. Hopelessly idealistic, boldly polite and of course reclusively heteroclite is what would sum me up. 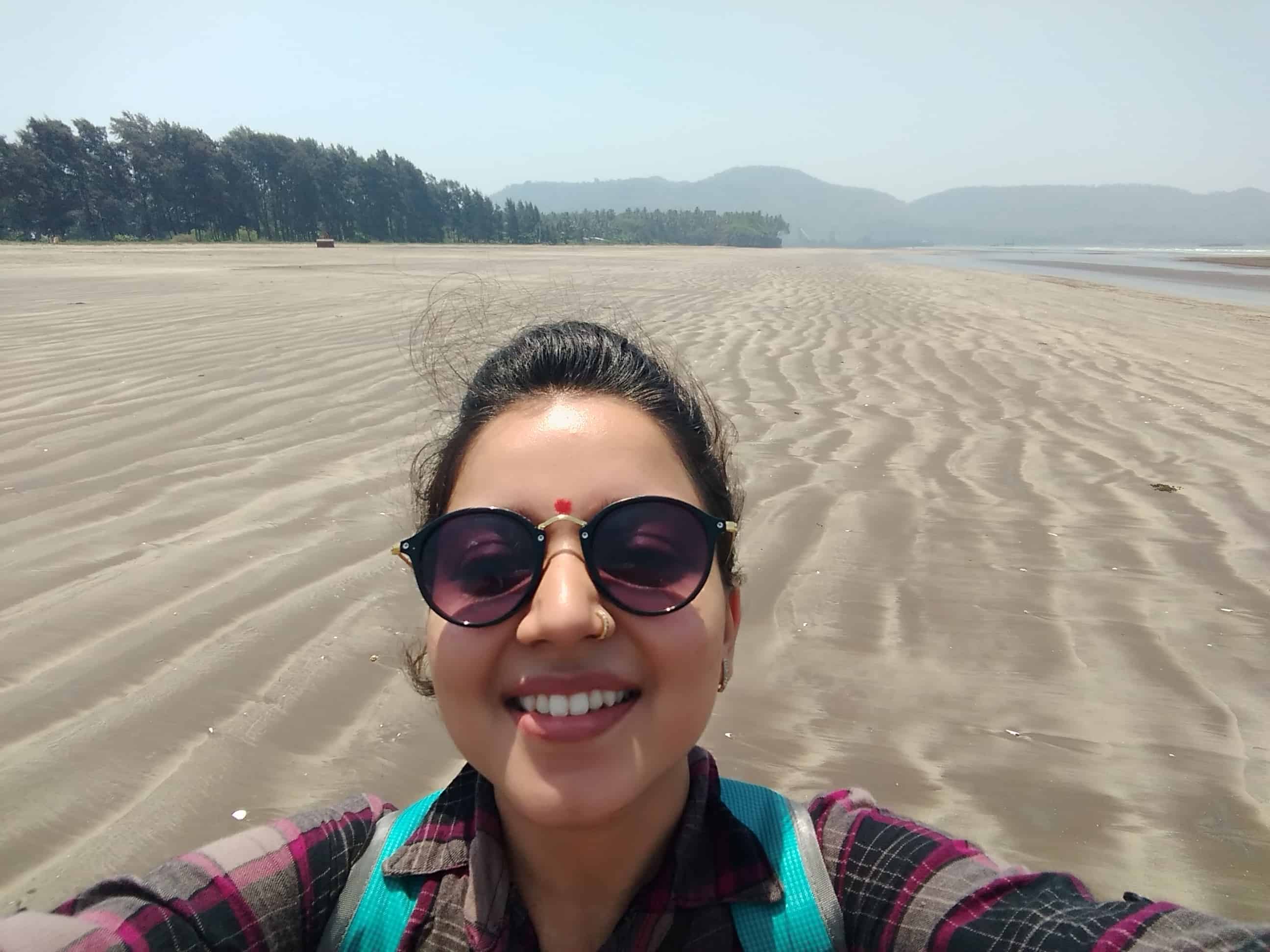 Highs and Lows from My First Amateur Solo Trip!

By the black shores of Revdanda, I introspect life as an amateur solo traveler. Setting out of the chaotic streets...